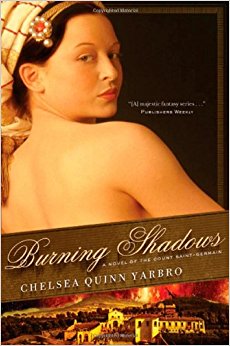 Burning Shadows, the twenty-first in the series about the vampire Count Saint-Germain, takes us to the fall of the Roman Empire and the rise of the Huns. In this novel which combines horror and history, as award-winning novelist Chelsea Quinn Yarbro has done from the beginning of the series nearly 30 years ago, Saint-Germain is the protector of village of the edge of the crumbling Empire.

As Attila and his hordes move through the area, burning and looting, Saint-Germain, the villagers and monks annoyed by the interruption to their contemplative lives, all take refuge in a monastery. With Saint-Germain is a mysterious woman, Nicoris, who learns of his true nature. For Saint-Germain, or Dom Feranescus Rakoczy Sanctu-Germainios, as he is known in this time and place, is a vampire.

The novel proceeds at a leisurely pace with an exploration of the romance between Nicoris and Saint-Germain. Equally slow paced is Yarbros examination of fifth century Hunish culture. Yarbro is acclaimed for the realistic depth of her portrayals of the various historical periods in which the long-lived Saint-Germain has starred over the course of the series, and Burning Shadows is no different.

Yarbro has found a great formula: combine elements of the romance novel with the uncanny in the form of a vampire story, and then keep retelling it in different historical periods. She writes great stuff and Burning Shadows finds her in fine form. New comers should be aware, however, that even though the Saint-Germain novels are marketed as thrillers, the thrills are actually pretty far and few between. More accurately, these are romance novels with an uncanny kink to them.